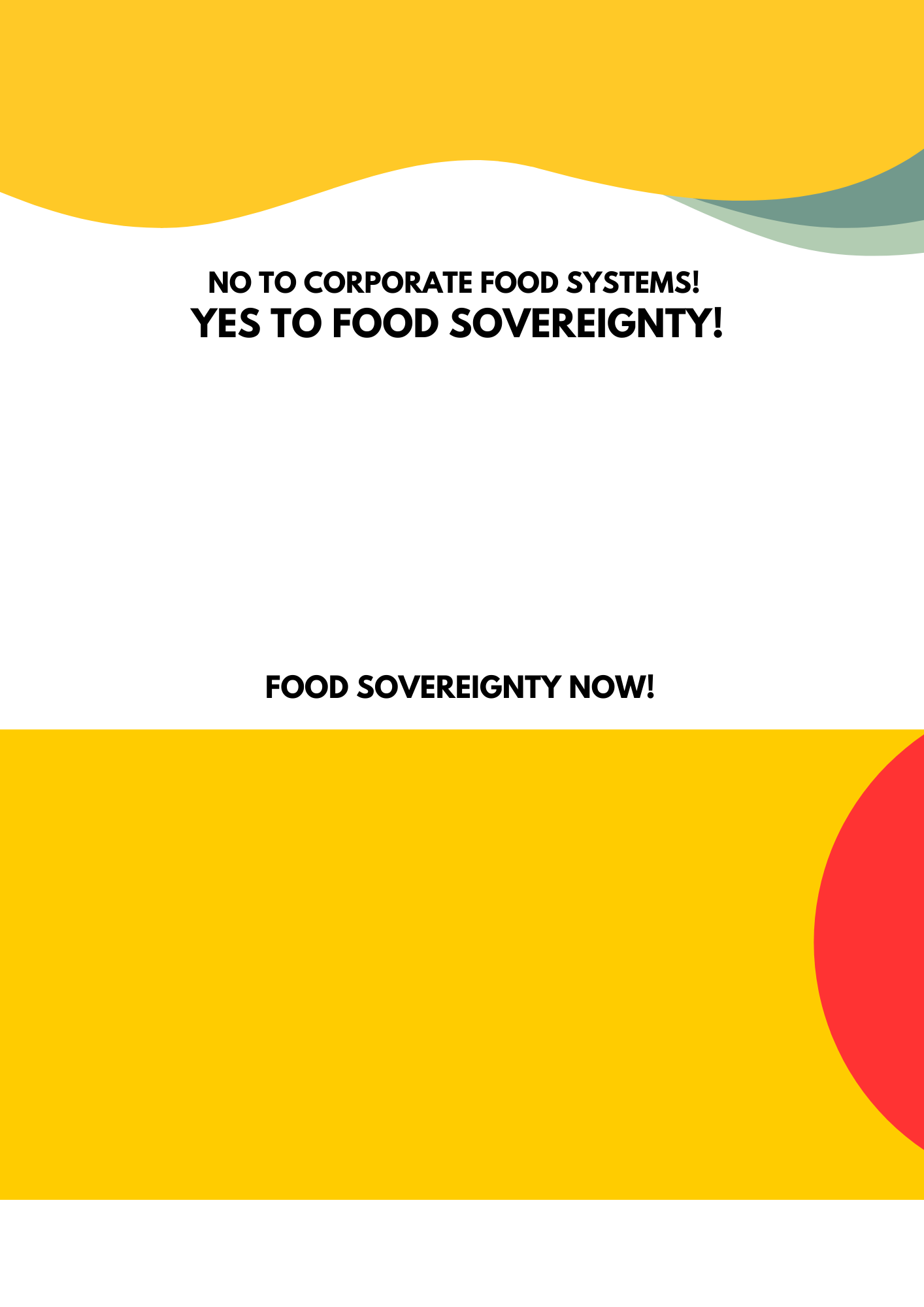 Industrial food systems, global supply chains and increasing corporate control of food governance are responsible for the inextricably interconnected and existential threats faced by our populations and planet, including the climate crisis, deforestation, loss of biodiversity, land and ocean degradation, air and water pollution, hunger, marginalization, and countless human rights violations. An extractivist development model centered on corporate control of resources, policy debates, and regulatory processes has produced a global food system that has most recently left over two billion people under-nourished and economically destitute. Furthermore, ultra-processed industrial products cause malnutrition, excess weight, and obesity. The COVID-19 pandemic continues to unveil both the structural frailties and global inequities of this corporate market-based approach - a failed model that continues due to deep power asymmetries and a lack of political accountability to ensure that public institutions and policies serve the public good and demands and needs of the most vulnerable. Urgent political actions, from local to international levels based on democratic negotiation and political consensus-building, are needed to address growing inequality across and within countries, structural injustice, gender-based violence, and displacement. The status quo is simply untenable for the majority of the world’s population, and unviable for our youth and future generations. We cannot continue to divert the majority of public resources and institutional authority towards propping up false solutions that serve corporate interests and will fail to tackle these systemic global challenges.

The necessity of rights-based approaches to combating crisis
The only just and sustainable way forward is to immediately halt and transform corporate, globalized food systems. The first step on this path is fully recognizing, implementing, and enforcing the human right to adequate food, which is a human rights obligation of States and UN agencies. While foundational, the right to adequate food is indivisible from other basic human rights, such as the right to health, housing, safe working conditions, living wages, social protection, women and LGBTQIA+ rights, clean environments, and civil-political rights including collective bargaining and political participation, which collectively should be central to any transformational process. With this critical rights-based orientation, public food policy and governance must put peasants, indigenous peoples, fishers, pastoralists, workers, landless, forest-dwellers, consumers, urban and rural poor, and among these women and youth, at the center of governance and policy-making tables. Governments, and regional and international institutions, must support these constituencies’ pathways for transforming corporate food systems through agroecology and food sovereignty. We reject any empty dialogue process which ignores human rights and fails to explicitly and meaningfully elevate the agency of these food systems actors.

UNFSS: illegitimate multistakeholderism enabling corporate power
The UNFSS 2021, initiated by the UN Secretary General shortly after signing a comprehensive agreement with the World Economic Forum (WEF), fails to meet these fundamental requirements. Established by 1000 of the largest corporations in the world, the WEF and its affiliates have been controlling the Summit’s design, structure, processes, governance and content. Large multinational corporations are increasingly infiltrating the multilateral spaces of the United Nations to co-opt the narrative of sustainability, and divert it back into the channels of further industrialization with digital and biotechnologies, extraction of wealth and labor from rural communities, and concentration of corporate power in national-global governance. The capital and technology focused agenda proposed by the UNFSS reflects these corporate interests and is politically, socially, economically and ecologically destabilizing. We denounce the UNFSS 2021 for disregarding the urgent need to address the gross power imbalances that corporations hold over food systems and this UN event, and we reject false solutions which will continue to oppress and exploit people, communities and territories.

Instead of being grounded in human rights, the UNFSS is a multistakeholder forum in which all actors, whether governments, individuals, regional/international agencies, or business/corporation representatives are portrayed as equal participants. But stakeholders are not necessarily rights-holders: people’s and communities’ rights and sovereignty should not be confused with private-sector business interests. While majority of the world’s food is produced by small-scale producers and workers, this individuated multistakeholder process gives outsized power to a few powerful corporations that control food, agricultural and capital markets. The so-called Scientific Group of the UNFSS impoverishes the scientific basis for responsible policy making: it advances narrow, corporate backed narratives and excludes diverse forms of knowledge and areas of expertise such as agroecology, indigenous knowledge and human rights. The lack of adequate Conflict of Interest safeguards in the Summit processes has allowed corporate-driven coalitions to position themselves as agents for implementing public policies with public resources, but without the accountability mechanisms, mandates and transparency standards of public institutions.

We will not accept this top-down, non-transparent and unequal process of deliberations that has resulted in corporate friendly “Coalitions of Action.” The capital-intensive, proprietary technologies and products proposed as “game changing solutions” will be ecologically destructive, deepen extractivism, colonialism, patriarchy and inequality, and open up more areas for corporate expansion and control.
The failure of the UNFSS governance structure has been laid bare, as many ‘stakeholders’ are walking away from the process and no political consensus has been reached among UN member states for truly transformative pathways forward to achieve the goals of the 2030 Agenda. In this context we find it unacceptable that the UNFSS, as a non-normative process with an illegitimate governance structure, is attempting to infringe on and undermine the UN Committee on World Food Security (CFS), which is an intergovernmental system, and the foremost and most inclusive UN multilateral body for food governance, with the authority and legitimacy to lead food system dialogues and policy-making. The UNFSS does not have this authority and violates the CFS’s mandate and reform statutes. We demand that the inclusive vision and processes of the CFS be recognized and strengthened. We also remind UN leadership that the UNFSS has no mandate or legitimacy beyond September 23rd, 2021, and we urge our governments to defend multilateralism, and rights-based and participatory policy-making, as established by CFS member states regarding the rules of participation of civil society organizations and social movements.

Food sovereignty for food system transformation
The struggle for sustainable, just and healthy food systems cannot be unhooked from the realities of the peoples whose rights, knowledge and livelihoods have gone unrecognized and disrespected. We have the viable solutions to address the systemic problems in our food systems. As we have demanded in our People's Autonomous Response to the UN Food Systems Summit, the transformation of food systems must be ecological and socially transformative, putting forward a feminist vision of equality and justice. Since 1996, social movements and civil society have been building a global movement and community-based processes of governance around the vision of food sovereignty, based on agroecology, and the rights and aspirations of small-scale food producers, workers, indigenous peoples, women, youth and rural-urban communities.

I n this 25th year anniversary of food sovereignty, we reaffirm our unity and commitment to push for radically transformative strategies which recognize peoples’ needs, accord dignity, respect nature, put people above profits, resist corporate capture, and work collectively towards a fair and decent food system for all.

This declaration is also available in French, Spanish, Portuguese, Euskera, Arabic and Bangla 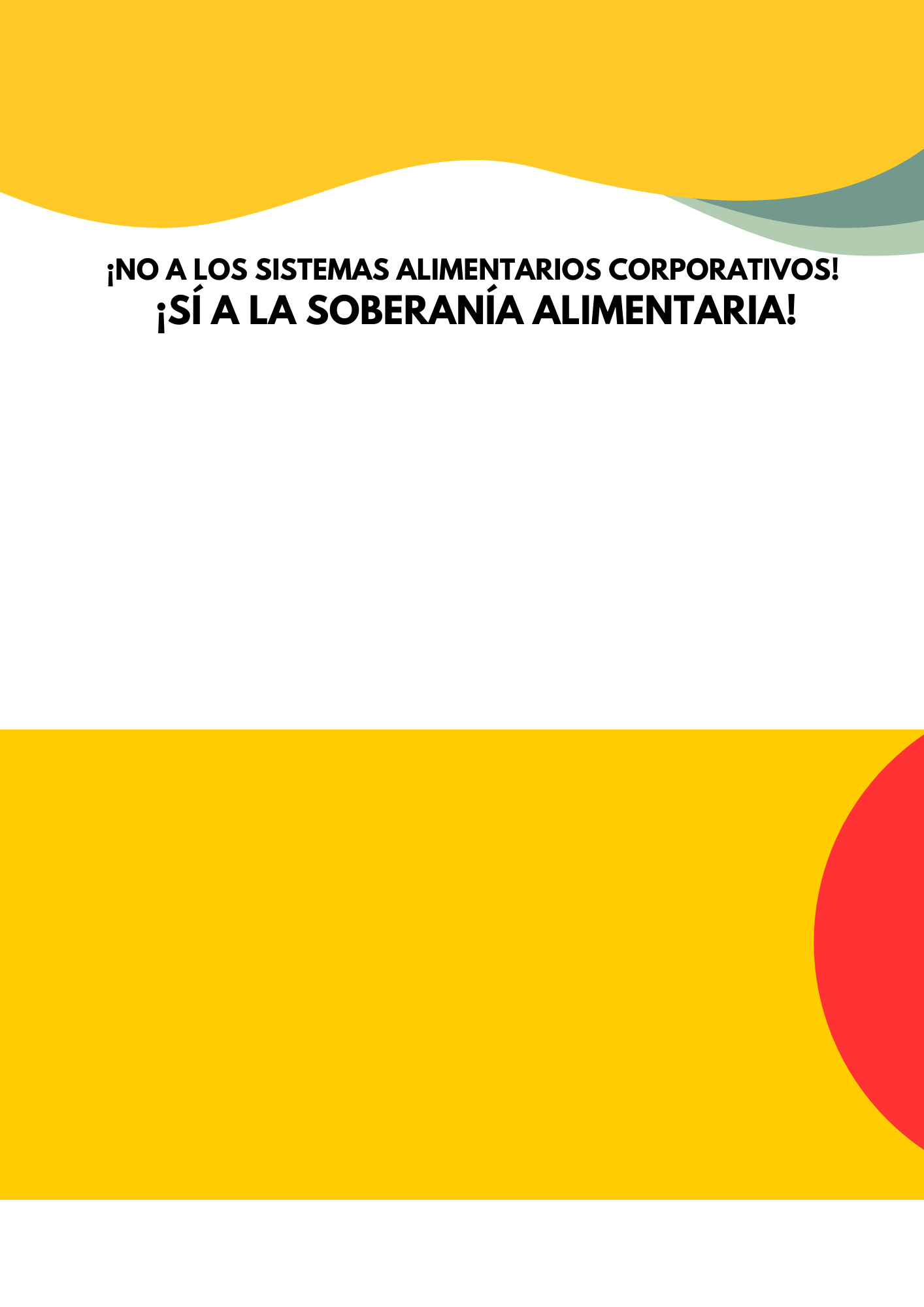 Thousands mobilize to call for food systems that empower people, not  companies

Between 25-28 July 2021, some 9,000 people gathered for a mostly virtual counter mobilization to oppose the United Nations Food Systems (UNFSS) Pre-Summit. The  alternative forum was hailed a huge success, as it drew together a wide variety of attendees  and was able to catalyze and amplify a counter-narrative to the official proceedings. With  critical articles and pieces published in major media outlets and several thousands of #FoodSystems4People posts on social media, the counter-mobilization succeeded in reaching a broad  public with its vision for genuine transformation of unsustainable food systems.

This post is also available in: Español (Spanish) Français (French)